Here is a transcript of a sighting at Rudyard which was reported in UFO magazine;

On Sunday 12th of November 2000, my friend and I were driving home to Northwich after visiting family members in Lincolnshire.

Sometime between 6 pm and 6.15 pm we found ourselves by a place called, I believe, Rudyard Lake, situated between the town of Leek and the town of Rushton, Derbyshire. It was a clear chilly evening, but the visibility was good, and as the front seat passenger I enjoyed a good view of the fields and hills as we drove through the area.

I have always taken an interest in the night skies and look out for stars and planets, and any other interesting things that can often grab my attention. I was doing much the same on this particular evening when Miss Whalley and I both noticed outside her window, a shimmering grey/white object glittering at no more than roof top height.

We were only travelling at around 30 miles per hour, but this still made it difficult to determine whether the object was actually moving, but it did not appear to be that far distant from us. While Miss Whalley was concentrating on the road ahead, I began to notice that it was swaying, more or less in a fixed hovering position. Then it seemed to disappear, before suddenly coming back. Now it began to rotate, first clockwise, then anti clockwise. Then it literally split in two, sending out a smaller, but just as bright rotating object.

It was like watching a shimmering watery mirror, and the swaying movement resembled that of a jelly fish swimming gently in the sea.

A vehicle just ahead of us flashed its lights, and I feel certain that the driver was making his way up a steep incline towards the object for a closer look. Then we noticed that another vehicle had pulled over to watch. We then decided to pull over at the first available spot to check it out for ourselves.

However, I remember that we both felt a bit panicky and opted to stay inside the car. My diagrams and attached comments give a true account of what we saw.

Neither of us decided to report it that night because to be honest we both felt ill and disorientated. Even our own home felt different, less familiar. It was a feeling that lasted from about 7pm to 8pm.

While viewing the object, I used my mobile phone to call my mother and auntie to describe this amazing sight. Twice our conversation was cut off by static interference. Whether this was somehow connected to the object, I have no way of telling, but it made me nervous.

A couple of days later Miss Whalley mentioned the incident to members of her family and was really surprised to learn that many people had reported seeing a similar object that same evening in the Macclesfield area of Cheshire.

A subsequent article appeared in the Macclesfield Express newspaper on Wednesday the 15th of November 2000.

My friend and I contacted the newspaper to tell them of our experience, but they said we were three days too late. The police seemed to know nothing about how or why the object was around at that time.

Looking back, I now find the whole experience quite relaxing, and the best thing I have seen in a long time. 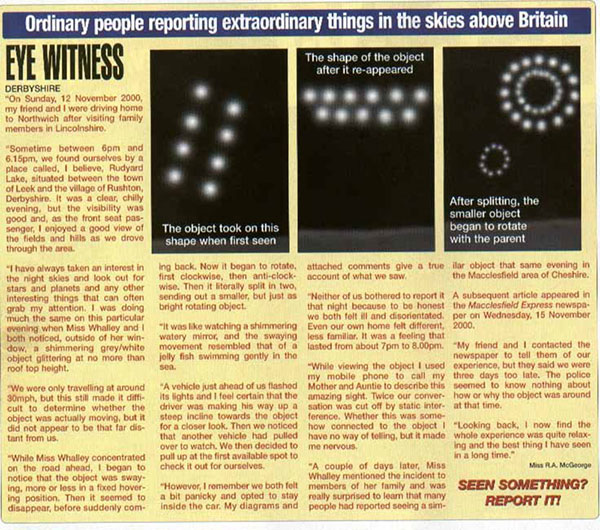