Here is a case investigated by my dear friend and research colleague David Cayton.

There are more than a few ironic twists to this tale of events which took place at the famous University of Manchester radio telescope facility near Goosetrey in Cheshire! 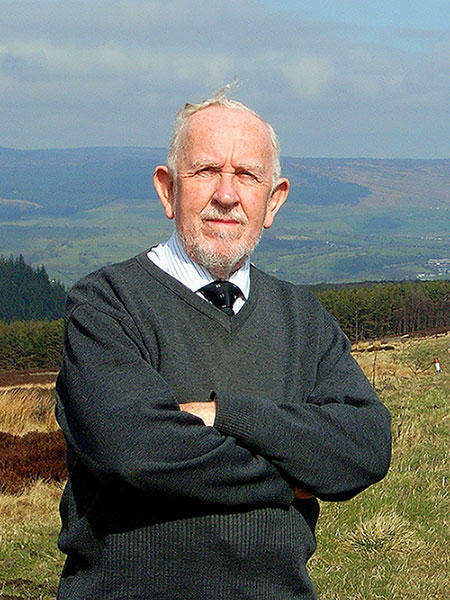 Firstly during my time as a Quest International UFO investigator for the area at that time, I became aware that UFO witnesses would invariably telephone Jodrell bank for confirmation, information and hopefully some explanation for what they saw before deciding whether to contact the police or Manchester airport. They expected that the Jodrell staff would know everything in our skies but of course overlooking the fact that the powerful telescopes there are radio telescopes, not optical telescopes! The witnesses found the staff uninterested in their sighting and all they would routinely do was to hand over the home telephone number of BUFORA researcher, Jenny Randles and end the call! (I contemplated asking Jodrell Bank to add my contact details to their list, but never did.)   What a great shame that my prime local resident witness to this startling event, did not ring them up at the time and ask them what was that ‘object’ was doing directly over their Lovell telescope dish for the past hour! 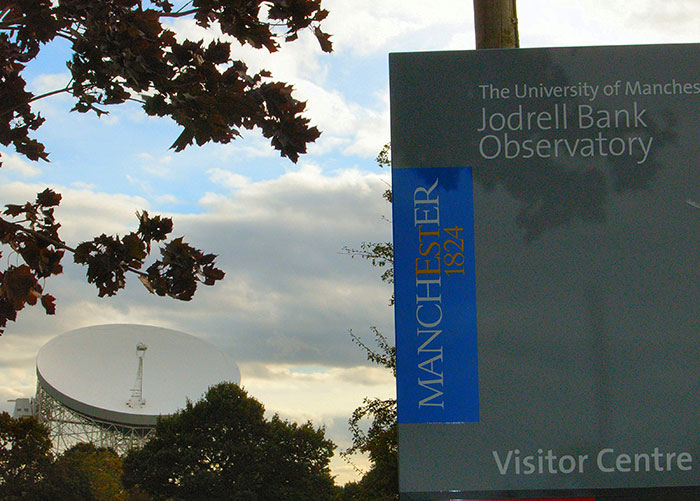 On the evening of Sunday 18 August 1996, at about 10pm Mrs Marie Brickhill was driving along the back lane from her home in Goosetrey village taking her parents back home to their flat in Macclesfield.   The lane passes close to the rear of the radio telescope and the public entrance before joining the A535 road. The weather was clear and dry as she drove carefully along the narrow and twisting lane. Her 85 year old father was the first to spot the strange soft white beam of light, projecting downwards from a stationary cigar-shaped object hovering motionless and silently, some 300-400 feet above the large Lovell main telescope dish. The reflector dish is approximately 250 feet in diameter and at that time was angled at about 45 degrees. The feature that really baffled Marie’s father (He was a member of the Royal Observer Corp in his younger days) was that the beam of soft white light was totally parallel, without divergence from its source from beneath the craft, down to the telescope dish some 300-400 feet below. He was aware that this anomaly was not conforming to physical laws; even narrow laser beams diverge slightly over long distance. Further more, another unusual aspect of this beam was its great width from source to the telescope. The beam of light was estimated to be filling about a third of the telescope dish, a width of approximately 80 feet! Just what type of apparatus was projecting such a large diameter beam and for what purpose? The three witnesses in the car also noted a group of small constant white lights at each end of the long cylindrical or cigar-shaped craft. Marie, somewhat spooked, did not stop the car, anxious to get her folks back secure in their flat. 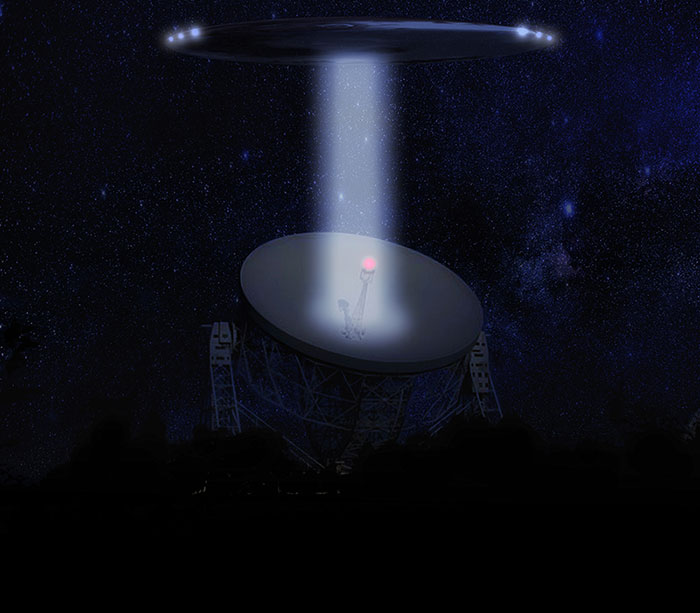 Marie returned via the same route and was shocked and alarmed to find the object and the light beam still there an hour later at 11pm. Arriving home she failed to persuade her sceptical husband to get out into the car and return to the lane to see the object for himself. He later regretted he did not do so as he had no real reason to doubt his wife and her sensible octogenarian parents. Marie was at the time employed as a senior manger at the Cheshire British Red Cross HQ in Knutsford, therefore we have three credible prime witnesses.

The editor of the Knutsford Guardian agreed to publish my appeal article with additional material by reporter Paul Broster. I was also directed to the Goosetrey home of the editor of a local freebie paper the ‘Town and Country Post’ he also kindly published an appeal for any other witnesses to contact me. Interestingly, he told me that there had been a previous UFO sighting over the Jodrell Bank facility back in 1966, very shortly after the telescope was commissioned! Again, these incidents demonstrate the ‘visitors’ interest in our technologies, in this case especially so, in view of the purpose of one of the most powerful telescopes in the world!

Although these newspaper reports produced no other actual witnesses to this particular event of the 18 August, I did receive some other interesting reports of other strange events in the Cheshire vicinity. I also called at about ten homes which had windows overlooking the telescope but none of these residents had seen anything that night. By chance, I recently found a farmer’s wife, Mrs Cumberbirch, who said her husband had witnessed the object and the light beaming down into the telescope dish. His farm is in sight of the facility, unfortunately this was one residence I did not visit in 1996! Despite his wife saying he had seen it on this night, when I telephoned to fix a time to interview him he’d had second thoughts and went into denial, a common trait with some UFO witnesses! He did however; put me in touch with another Goosetrey man who he said had seen the object. When I telephoned this man, Nick Hassle on 19 March 2003, it transpired that what he had seen over the telescope was a completely different event and much more recent.

Mr Hassle was awakened around 4am early in February 2003 by the sound of a noisy propeller type sound. From his window he saw two spaced red lights circling tightly over the Lovell telescope dish which he watched for while before it suddenly disappeared. He mentioned it reminded him of the sound of a world war two spitfire or hurricane. The lights he saw did not conform to the normal navigation lights at the wing tips of a plane. No light aircraft would be flying at that time of night in tight circles so close to the telescope dish! Our ‘friends’ often use recognisable types of plane or motor vehicle to disguise their craft but it is often reported that they mistakenly choose the wrong era of vehicle model/design. 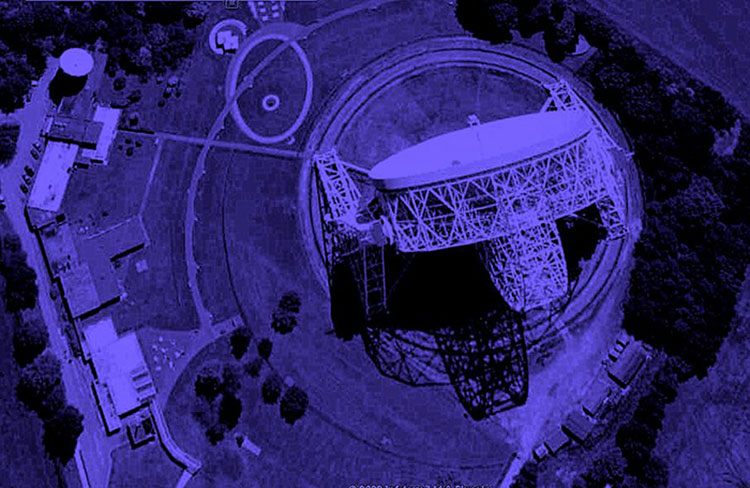 Some four weeks after the 18 August ’96, I paid a visit to the radio telescope facility. In the public area, I asked the information desk if I could speak with a technical person. I was directed to a member of the Macclesfield Astronomical Society (A retired Dan Air Pilot) who as a volunteer operated the Planetarium presentation show. He was very interested and helpful and offered to go into the private laboratory building via a coded locked door. I had asked to view their occurrence log for 18 August. It is important to note here that within ten days or so of the incidence, Paul Broster, the reporter from the Knutsford Guardian who aided my appeal, had contacted Jodrell scientists who said they had no record of anything out of the ordinary for that evening. Centre director, Professor Rod Davies, was quoted as saying “We have staff here 24 hours a day and nothing was seen”. I was naturally keen to know whether the beam of light (energy or whatever) had disrupted their work program, damaged computer systems, or indeed had any member of staff actually seen the craft hovering above their heads? The ex Dan Air pilot informed me that the same duty engineer was on duty the day I called and the night of the event. I considered that the technical staff were probably unlikely to see the craft 600 feet or so above the lab roof and the telescope, unless they stepped outside and walked away 50 yards or so and then looked skywards. Ten minutes later the laboratory door opened and a rather rude woman emerged to abruptly inform me that the duty engineer had declined to speak with me and there was no entry in the duty log book recording anything amiss on the said evening and no way was I to be invited into the secure lab area or view the log book. They did confirm however that the telescope was in use at the time in question.

Having previously met Dr Morison at a lecture he gave (‘Man’s Place in the Universe’) I rang him at home on return from his holiday. He was back on duty at Jodrell Bank on Monday 19 August. He informed me that since he was technically responsible for the current Lovell telescope programmes, if there had been a problem that night he would have known about it. Perhaps it is possible that whatever the purpose of the light beam, it did not actually interfere with the operation of the telescope equipment at the time?

During his lecture in Poynton and in TV interviews, Dr Morison had said that the SETI project was a complete waste of time due to the long timescales with the star/planet distances. (So he agrees with Stanton T Friedman SETI means “Silly Effort To Investigate”) He agreed with me while chatting at the end of his lecture, I thought it highly unlikely that advanced intelligences elsewhere would have in operation old- fashioned radio apparatus to receive our messages or possess compatible transmitters to send out a return message to us. (They use crop circle glyphs instead!) This conversation took place of course before Jodrell Bank was awarded their lucrative annual budget by the SETI organisation for a sub-contracted five year programme! Incidentally I had approached Dr Morison on behalf of Graham Birdsall to invite him to view the downloaded NASA footage ‘The Smoking Gun’ video, and then give a video interview to Graham and Russell Callaghan for UFO magazine, to record his comments regarding the remarkable footage of controlled objects around the Russian and US space vehicles. He was very keen to view but said he dare not comment in case his remarks might damage their contractual SETI funding for Jodrell Bank. (and also maybe his personal role and position?)

Ian Morison was interviewed on 4 November 1999 by the Manchester Metro News. This interview was prompted by Jodrell Bank’s resumption of another phase of SETI programme worth 10 million dollars! The telescope is nearly 40 years old and needs constant refurbishment. In the newspaper article, he states, “The trouble is that communication with other planets takes a long time. We are looking at stars up to perhaps 150 light years away. It means that if we ever did pick up any message, it could have been sent up to 150 years ago. And of course if we actually sent a reply it would be 300 years later, so you can see that interstellar communication is a slow process!” Asked about aliens and what they may look like, he was not prepared to take the word of alien abductees. His response was “This is not meant to sound big-headed but if I were going to visit and I wanted to make contact with people there (meaning here) I would deliberately aim to talk to scientists and astronomers and people like that because they at least have something in common. It annoys me that none of these aliens has ever come to talk to us!” It annoys me that here is just another example of the arrogance and ignorance of astronomers who profess to know about everything ‘out there’! the irony is, if Ian Morison’s staff had paused for a moment looking millions of miles upwards that night in 1996, stepped out of their laboratory and just looked up in the air a mere 600 feet, they would have indeed realised that SETI was a waste of effort and got what they were looking for…….knocking at their own front door! ‘They’ came to visit the astronomers that night Ian and you didn’t choose to acknowledge their call. In fact it would seem they have so far called at Jodrell Bank at least three times! Maybe next time the Jodrell Bank staff will answer the door, or is it likely they may have but don’t want us to know about it?!