Sylvia Jackson comes from Bollington, and she is my cousin. One evening in the mid 1990s, Sylvia and her husband decided to take a drive out to the Wild Boar Inn near Wincle. Everything was perfectly normal and they were looking forward to a relaxing evening as Sylvia drove through Sutton past the Lamb Inn. A couple of hundred yards before the Ryles Arms their car headlights began to dim, and the car lost power and coasted to a standstill. Sylvia had no idea what was wrong as the car had worked perfectly up to that point, and she had always taken care to have it well maintained.

They sat there for a few minutes wondering what to do. Suddenly, the car headlights came back on and Sylvia turned the ignition key. The car started and ran with no problem at all. As the car was running normally, they decided to carry on to the Wild Boar Inn. They drove past the Ryles Arms and were approaching the T junction just below Clulow Cross when the same thing happened again, and they coasted to a halt just a few yards short of the junction. 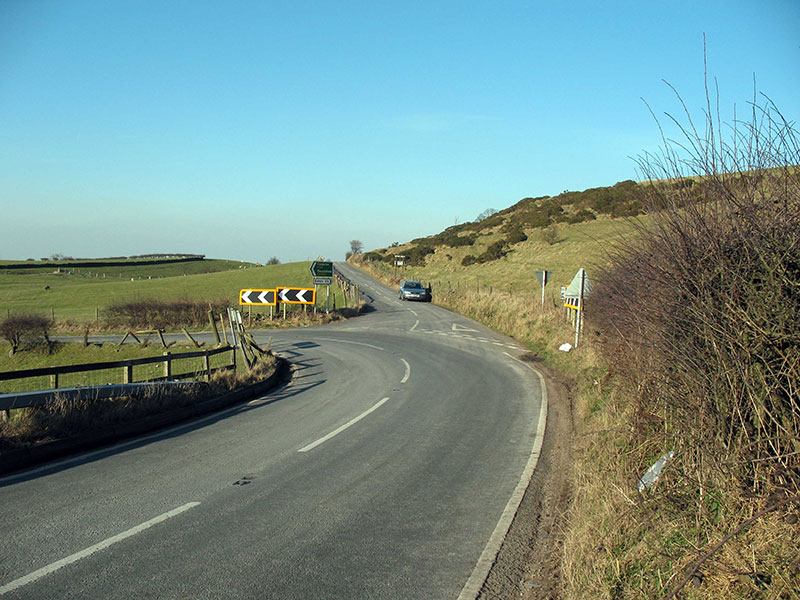 They sat there in the dark for a few moments wondering what to do, then Sylvia got out of the car and was astonished to see a large circular UFO hovering a couple of hundred feet away, just beyond the T junction. There were many different coloured lights on it and it was totally silent. Sylvia isn’t sure what happened next but she does recall seeing very large shiny eyes looking at them both from the roadside in front of them. After a while they watched the craft fly slowly off in the direction of the telecommunications tower on Croker Hill. 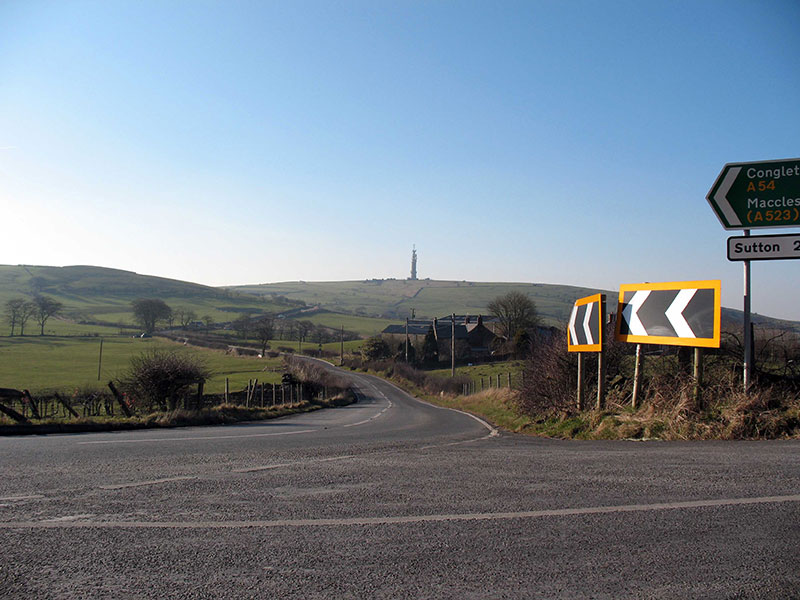 They got back in their car and just as happened earlier, the car started without a problem. As the Inn was only a few hundred yards away, they carried on and related what they had just encountered to the landlord. A gentleman overheard the conversation and interrupted them in order to tell them that he too had seen the craft that evening. 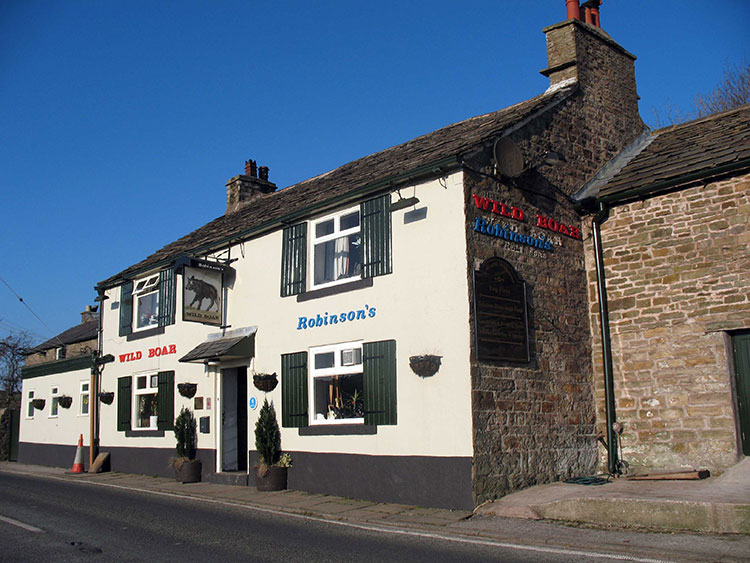 After a pleasant evening in the Wild Boar Inn they drove home to Bollington without a hitch. The problem with her car never happened again in all the time she owned it.

If you’ve studied this subject at all, you will already know that one of the most common effects of encountering a UFO is that electrical equipment can cease to function normally. This is a particularly common event with vehicles on country roads. The Reverend Jim Harrop who was a good friend of mine, once told me that his daughter underwent exactly the same experience. In her case I believe the craft actually landed in the field by the roadside. I don’t know the exact location, but I believe it was in the Macclesfield area.

Another case I investigated involved a lady who had driven 6 hours from the south of England to Macclesfield without a problem. It was Saturday the 24th of August 1991. She arrived at the Sainsbury’s roundabout at the top of Westminster Road when suddenly without warning her car stopped running. Nothing too strange about that. However, it got a great deal more strange when exactly the same thing happened to a van and a motorbike as they arrived at the roundabout. The lady was a member of the AA, and as all three vehicles seemed completely dead, she gave them a ring. On arriving, the AA man tried the ignition key on her car which started into life with no problem. The same thing happened with the van and the motor bike. No faults were found. On this occasion, no UFO was ever sighted or even thought of, but I am aware that UFOs have wonderful stealth technology, and I wonder if one was hovering unseen above the roundabout.

On another occasion, a friend of mine was driving his old diesel landrover through Pewsey Vale in Wiltshire when he saw a glowing UFO flying nearby. The lights on the landrover and the other electrical components ceased to work, but in this case the engine continued to run. I am convinced that this was because it was an old diesel landrover with a mechanical fuel pump. It therefore required no electrical power to keep on running, and therefore the UFO had no effect on it.

Returning to my cousin Sylvia’s case, I would like to point out that the main event took place just below Clulow Cross, which is an ancient site of considerable importance. 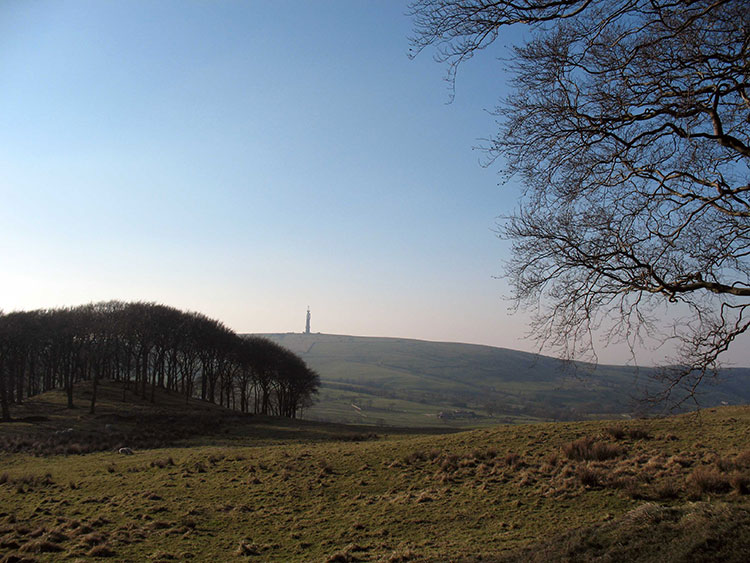 I would recommend people to check it out on the internet. Detailed study of hundreds of cases has shown that UFO sightings and encounters often occur near ancient sites such as henges, standing stones, burial mounds, etc. I’m fairly confident that the Ley Line energy which is usually a feature of such places is a major factor in these sightings. 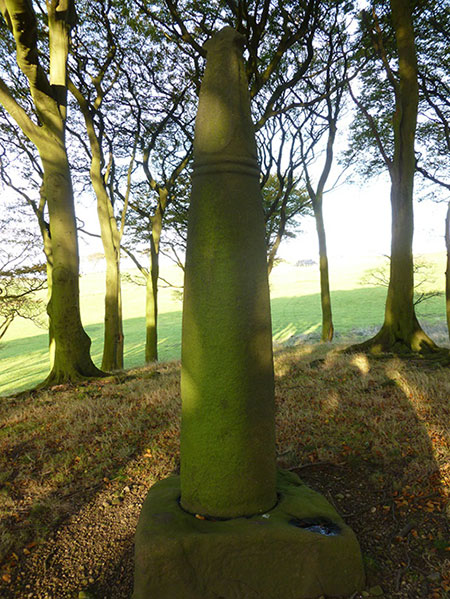 Another ancient site of very considerable importance is the Bridestones on Bosley Cloud.

Some years ago, the newspaper editor Doug Pickford told me about the case of a businessman who was driving home over Bosley Cloud late one evening. He decided to stop his car near to the Bridestones in order to have a pee. He has no idea what happened next but found himself in the field amongst some brambles with no clothes on. His first thought was that perhaps he had been attacked and this was the reason for his loss of memory. He got back onto the road only to find his clothes strewn along on the tarmac near his car which still had the keys in the ignition. He grabbed his clothes and drove home where he discovered that his journey had taken far longer than it should have done. My strong feeling is that this is a case of an abduction by UFO, which more often than not results in loss of memory during the period of abduction 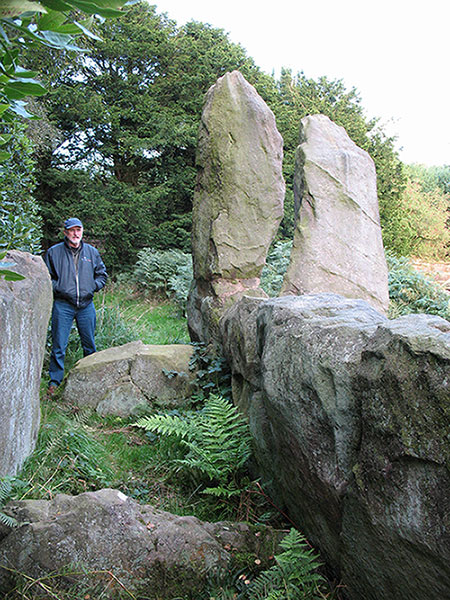 Doug ran the story in the newspaper which created quite a lot of interest in the Bridestones. The farmer who owned the land was not pleased by the extra visitors generated by the story and rang Doug to complain. He told Doug that all this talk of UFOs and energy lines was a load of nonsense, but then volunteered the information that his father, who owned the farm before him, would never put pregnant cows in the field by the Bridestones because they would always abort their calves. Obviously something very interesting is going on in that area and the many sightings of UFOs around Bosley Cloud confirms this. I would also suggest that the reader researches the Bridestones on the internet. It is a tragedy that this ancient site of such importance has been so poorly treated.