Dennis was driving home from work along Heybridge Lane, Prestbury, when he heard a humming sound. He immediately thought that his car had developed a fault, but as he only lived in Clarke Lane, Bollington, he decided to keep going. The noise continued and when he reached home, turned the engine off and got out of the car. He was very surprised to hear that the humming sound had got even louder. He described it to me as sounding like a child’s humming top.

He looked up to see that a circular UFO with a row of lights around the bottom edge was going round in exact circles above the large electricity pylon which stood by his garden. The UFO was not spinning. After several minutes it shot away with incredible acceleration.

Later, on another occasion in the late 1970’s, Dennis was driving his car to Macclesfield on his way to Macclesfield College in Park Lane where he was going to attend a night school class. There were 3 other ladies in the car with him on a similar errand. As they approached Tytherington Secondary School they all saw a huge UFO hovering over the area near Beech Hall School. They pulled into a layby which was where the speed cameras are now located and got a better view of it. He described it as like a huge tambourine with 3 rows of horizontal lights on the side, top, middle and bottom. Here is a single frame from a film shot by Daniel Fry who had numerous ET encounters. I wonder if the craft Dennis saw looked something like this one. 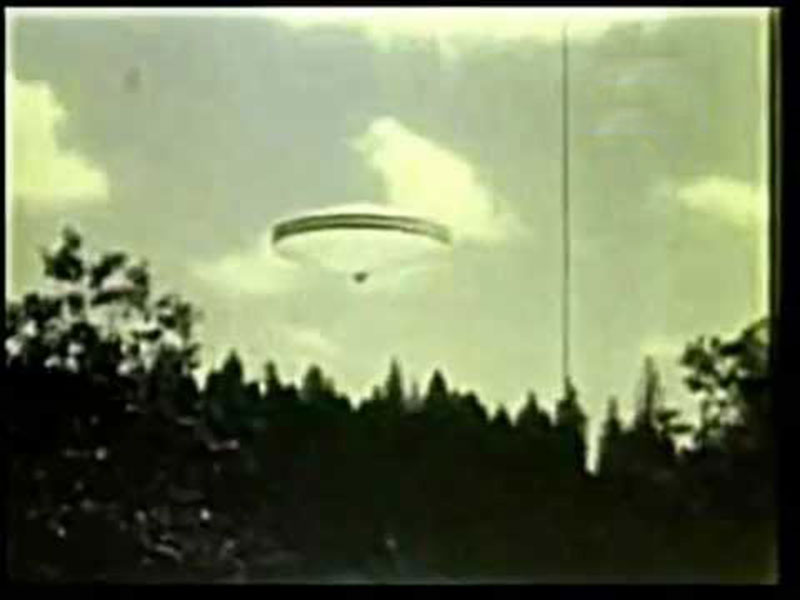 On another occasion, while I was working at number 7, Manchester Road, I was told by Gill Dorey that around October of 1978 or 79, she saw a very large ring of lights hovering above her house. I wonder if it could have been the same craft. That area of the Bollin Valley is certainly a hotspot of activity for UFOs. Remember Mrs Stevenson’s case.

Another case from this area is the sighting by Pat who lived in Abbotts Close, off Abbey Road. Around November of 1980, she got out of her car on reaching home, and turned to look back across the Bollin Valley. She was amazed to see a yellowish white UFO hovering above the railway line. She watched it for about 2 minutes before it shot away at fantastic speed. It wasn’t until November of 1996 that she told me what she had seen. She was so afraid of being ridiculed that I was the first person she had told about her UFO sighting.