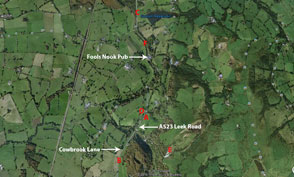 I am deeply grateful to Dawn Dale for coming forward with her report of what she, her mother Ursula, and her friend Chris saw when they were driving home to Macclesfield along the Leek Road after a New Year’s Eve meal at the Boars Leigh Restaurant at Bosley.
This report is extremely important as it is further confirmation that there was a great deal more than just the Rendlesham Forest Incident taking place in those few hours around the end of 1980. Dawn’s sighting took place just three days after my “Fools Nook” sighting of 9.00pm on 28th of December 1980. The location of Dawn’s sighting was only 800 yards down the road from the point where I stood less than 200 feet beneath a large disc shaped craft, and her sighting was at almost exactly the same time as when Bridget was taken aboard a craft in Wilmslow, ( see Wilmslow UFO in Local Sightings). When we also consider the Hazel Grove sightings, and the Cash/Landrum case at Huffman in Texas from 28th of December 1980, we see just how busy a time it was.

I have known for many years that the A523 Macclesfield to Leek road was a real hotspot for UFO activity. If you take a careful look at the Local Sightings, you will easily see that this is so. There is a small section of this road as shown in the map below, which is particularly busy. When one considers that I have come across these many sightings and others not yet included here without too much effort, it makes me wonder just how many unreported sightings have occurred in this location. I have marked letters on the map which correspond to some of these sighting locations.

I recently took a photograph of Jodrell Bank Radio Telescope while standing in Cowbrook Lane. We know from a report in Local Sightings by David Cayton that UFOS are definitely interested in Jodrell Bank. This photo shows that from a UFO’s point of view, Jodrell Bank is a split second away from the loation shown above. 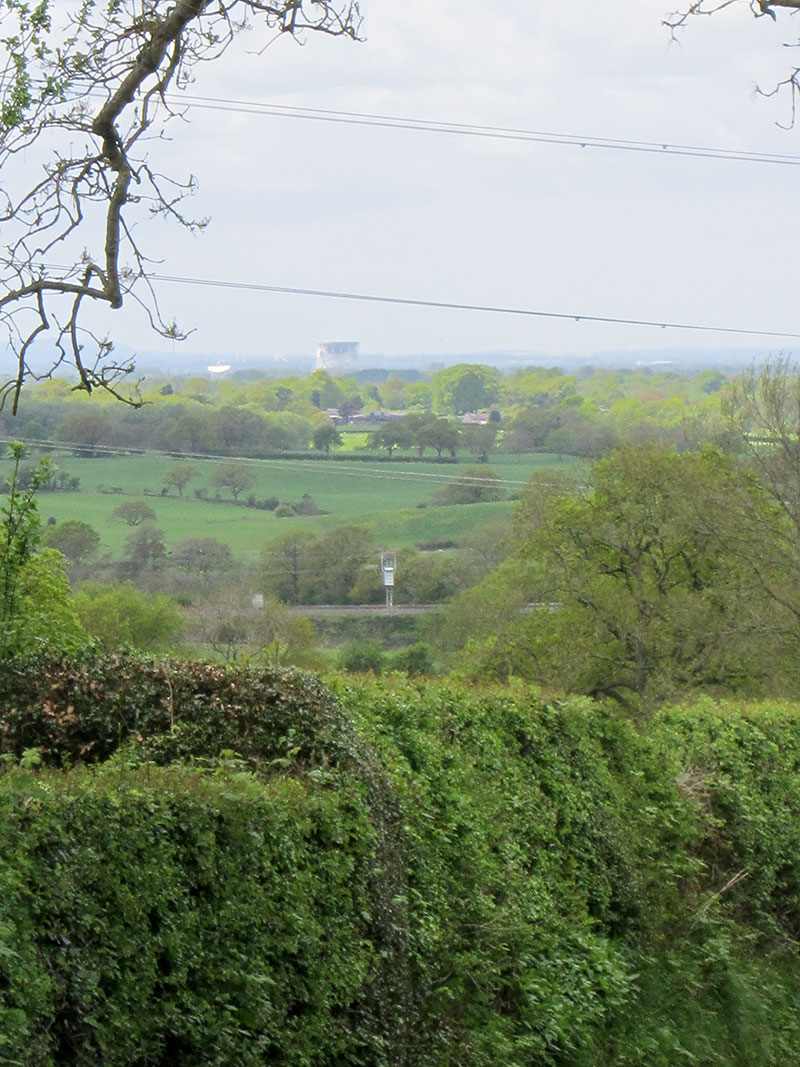 I’m quite certain that these cases which I’m reporting here are but the tip of the iceberg. I wonder if the highly radioactive technology being deployed by the Cash/Landrum UFO (in my opinion American hardware), was the catalyst for all this activity at the end of 1980. There is more than enough evidence to prove that at least some Extra Terrestrial races are extremely unhappy at our seeming willingness to contemplate mutually assured destruction by the use of nuclear weapons. There is no doubt at all that some of the many previously undisclosed nuclear weapons stored at the Bentwaters base were deactivated by UFOs overflying it during the Rendlesham Forest Incident. Surely, they were once again sending us the message that nuclear weapons will not be tolerated, nor will they be allowed to be used.
THE ENCOUNTER
The time was around 12.45 am on the 1st of January 1981. Dawn, her mother and a male friend Chris had just left the Boars Leigh restaurant at Bosley after having a New Year’s Eve meal there. None of them had been drinking alcohol. Chris was driving, with Dawn sat in the front passenger seat beside him. Dawn’s mum Ursula was sitting in the rear behind Dawn.
As they approached the location on the Leek to Macclesfield road as shown in these photographs,they noticed what at first looked like a very large star which began to fall towards the ground. 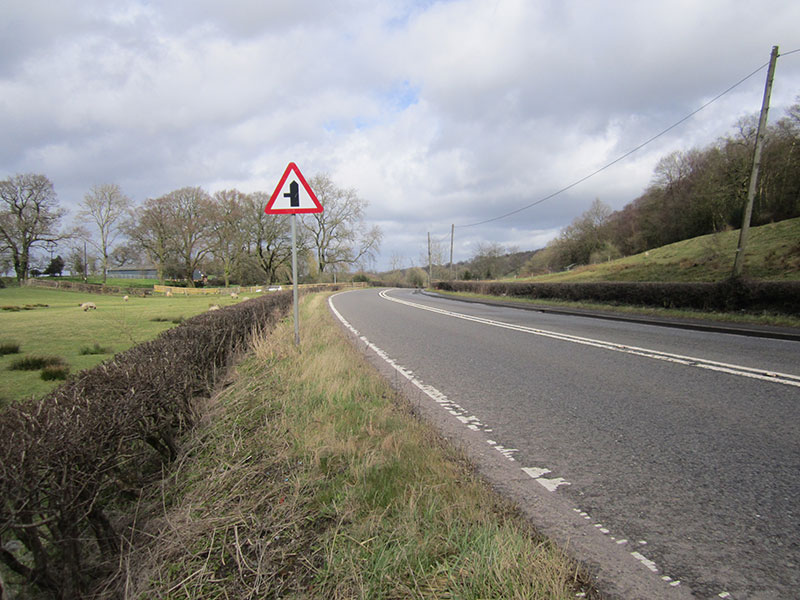 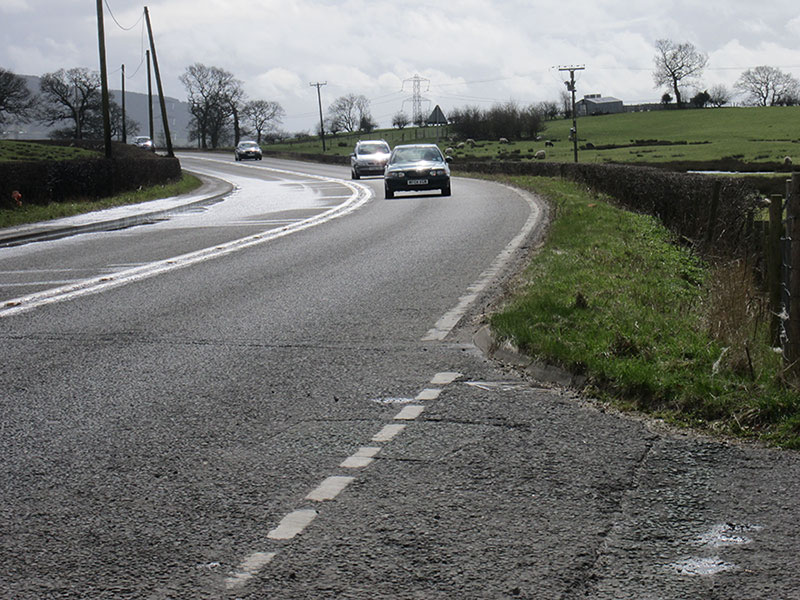 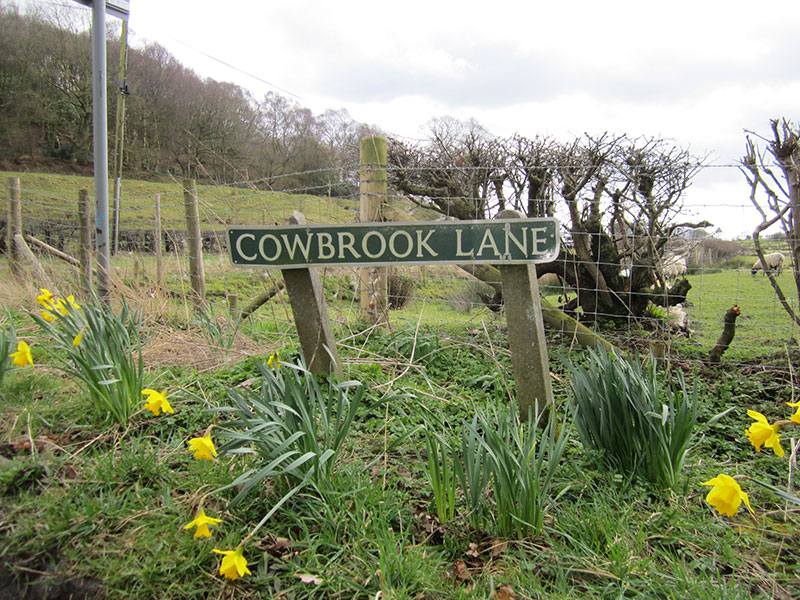 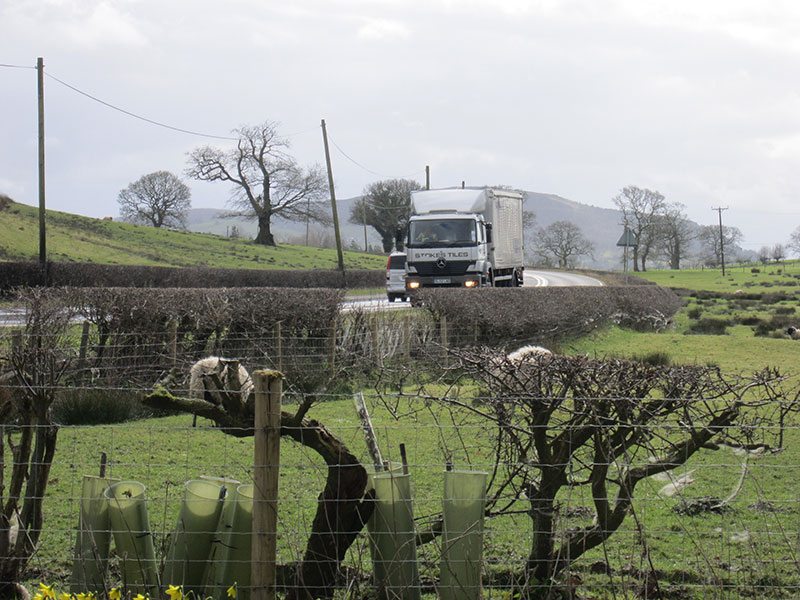 This seems to have been particularly well observed by Ursula looking through the rear passenger side window. It seems that the object probably came down directly over the main electricity power lines as shown in this photo taken from the roadside. The main electricity grid line runs near Fools Nook and across countryside to within a few hundred yards of the main Macclesfield Refuse Tip on Gawsworth Road where other UFO sightings have taken place. 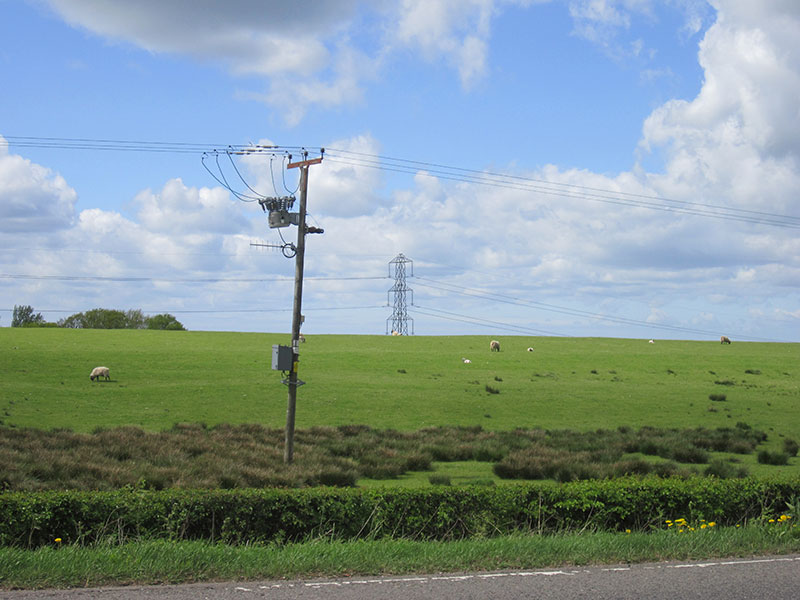 Some years ago, I investigated a possible cow mutilation with David Cayton at the farm adjacent to the Macclesfield Refuse Tip. According to the farmer, the unfortunate cow had somehow been struck by electricity coming from the main electricity grid line which crosses his field. We enquired of professionals within the electricity industry who found this explanation highly unlikely. Some years earlier, the same farmer had discovered that a considerable area of his potato crop, together with a large amount of the soil beneath it, had been magically scooped up and away, with no sign as to where it had gone. Both of these instances suggested to David and I that Extra Terrestrials were monitoring pollution levels around the refuse tip. Such behaviour on their part has been seen before where large scoops of earth and crops have been taken with no trace.

(We know from numerous other sighting and contact experiences that the occupants of these craft are able to utilise the energy passing through our electricity grid system). Craft have also been seen within thunderstorms and it is likely from other reports that the craft are able to recharge using this energy source.My apologies for digressing here but I feel that all these factors are important. I now return to Dawn’s sighting;

Ursula then noticed a large fluorescent red sphere come from the main object which then flew across the field towards them. It was at this point that Chris realised what it was. Dawn remembers him exclaiming; “Christ it’s a UFO”.
As the car slowed down to a standstill, they all noticed a red glow coming from above the car which was reflecting brightly on the chrome trim around the car windows. Then, looking through the rear window, they could see a large shimmering red sphere which was hovering just a foot or so above the road. It measured at least ten feet in diameter and it illuminated the road around it. Chris was all for getting out of the car to take a better look but Dawn’s mum shouted at him not too.
As Ursula was sitting in the back seat, it seems that she got the best view of it through the rear window. She told me that she had never seen anything like it in her life before. It occupied most of the width of the road, was definitely spherical in shape, and was fiercely fluorescent blood red in colour. What she found most intriguing was the fact that some kind of electric flashes or sparks were coming from all around the sphere, rather like the sparks from an oxyacetylene cutter on metal. The sparks were extending a few feet from the object which then began to move towards them. It was at this moment that another car appeared, coming from the Macclesfield direction. This seems to have been the cue for the red sphere to fly upwards into the sky and away.
They drove home but somehow felt strange as if perhaps much more may have happened than they remembered. There’s a strong possibility that they had experienced a “missing time event”, which so often happens in cases like this.
The very next day, Ursula was visited at her home in Macclesfield by two men who were the typical “men in black”. This visit from these very strange dark suited men occurred before any of the three witnesses had reported the sighting to anyone, other than a brief mention of it to a neighbour. How on Earth do these strange people know about our sightings? And yet they do know. It’s as if they are connected in some way to the owners of these exotic aerial vehicles. The two men sat on the settee opposite Ursula and asked her questions about what she had seen the previous night. It seems that they may have left some written information with her concerning the event, though she has no idea where she has put it. In all likelihood, she will have received a mental suggestion from them to throw it away with the rubbish once she had read it. This is not at all unusual.
I have personally had contact with extra terrestrial or extra dimensional beings throughout my life. I am confident that Dawn and her mum have done likewise, though they’re perhaps not quite as aware of it as I am. One of the tell tale signs of contact is the presence of implants which the ETs put inside of us. I’ve had several, including one inside my nose, and one in the side of my left big toe. I’ve also had a fair number of single, double and triple puncture marks which create bruises, triangle marks and scoop marks, where small scoops of skin are removed, usually from the arm or leg. The process is obviously connected to our genetics and usually affects different generations of the same family. There’s nothing new in this. It’s obviously been going on since at least Abraham and Sarah’s day.
In Dawn’s case, it was just a few years ago that she began to have serious sinus problems. As a result, she underwent a scan at the hospital which revealed an object implanted inside her left ear. Her mother also discovered that she had a similar object, also in her left ear. They both underwent surgery to have these implants removed, which made a metallic clinking noise as they fell into the metal receptacle. The surgeon asked Dawn’s mum if she’d ever been shot, to which she indignantly replied; of course not! These implants which are sometimes metallic and sometimes biological in composition are well known, and the late Doctor Roger Leir has removed around 17 of them from people who claim to have been taken by extra terrestrials.
Here is part of his testimony

Around 2009, Dawn became aware that she was setting supermarket alarms off as she was walking through the doors with no apparent reason to explain it. She also noticed that she had developed a pimple like spot on her left upper arm. This would change to a red colour when exposed to the sun, but looked very different to the rest of her skin. Dawn was concerned by this and mentioned it to her doctor who agreed to remove it for her, saying that it would only be a very small incision and require only a couple of stitches. It turned out to be twice as difficult to remove needing 4 stitches in her arm. If, as I suspect, this was indeed an implant, then I’m not surprised it was awkward to remove. It seems that all implants are very specifically attached to numerous nerve endings for some reason. They also emit a frequency which some equipment can pick up.
We will never know for certain if this was an implant in Dawn’s arm. All we do know is that since having it removed, she no longer triggers supermarket alarms ! Coincidence? Perhaps.