Ask the majority of people; “What are crop circles?” and most of them will reply that they’re just pretty patterns in the wheat fields made by pranksters with stomping boards and pieces of string. It’s not surprising that this would be their response, because that’s exactly what the government and the free press and impartial TV broadcasters, (“don’t make me laugh”), want us to believe. Just as in the same way they’ve been telling us that UFOs are all misidentifications of naturally occurring things like swamp gas, earth lights, weather balloons, or perhaps even hallucinations brought on by mass hysteria or reported by people who are “a sandwich short of a picnic”. 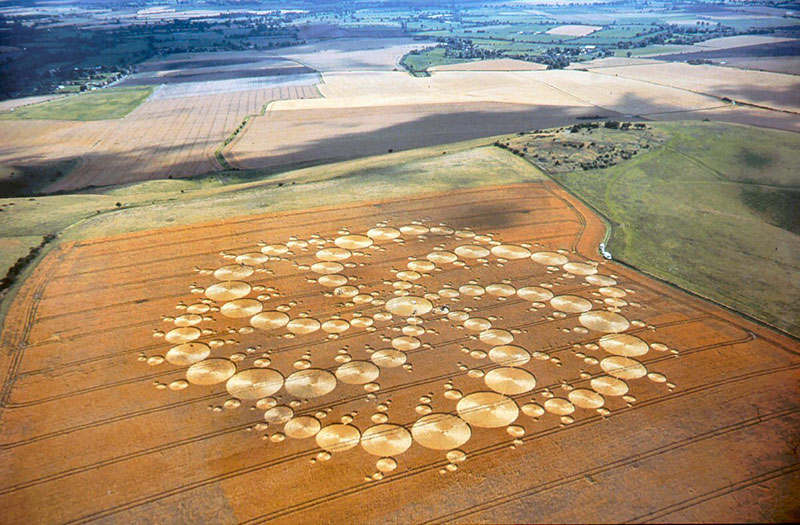 With several governments throughout the world now releasing their UFO files which confirm that unknown aerial vehicles, not originating on Earth, routinely fly over their air space, we are entering a new era of truth. So what is the truth about crop circles?

Well, first of all, our government would say that they’re not interested in them, which I can prove is not the case. Government is fully aware of the significance of crop circles and their military aircraft keep a constant watch on certain locations in Wiltshire where genuine crop circles have appeared. On the 30th of July 1991, two very good friends of mine witnessed an army Chinook helicopter hovering over a new crop circle at Westwood, Lockeridge in Wiltshire. It was around 6.30 am. 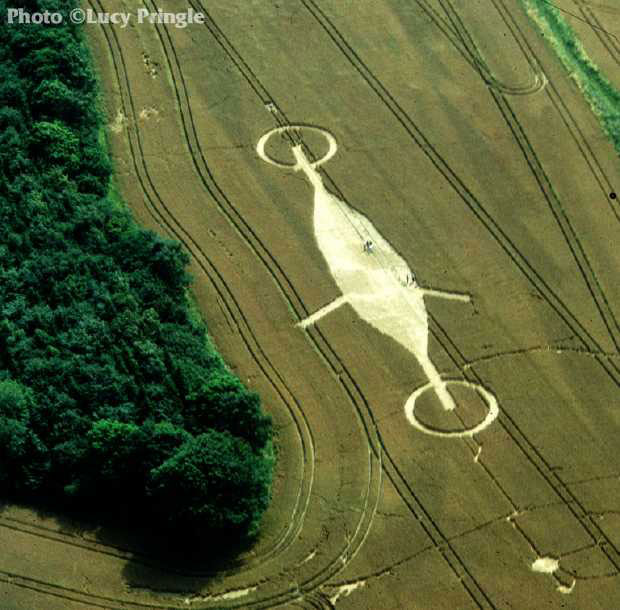 The armed soldiers who got out of the aircraft proceeded to cordon off the crop circle. Scientists wearing protective clothing then took samples of the circle’s crop and underlying soil. My friends were denied access to the circle while this was taking place. There is much more to this story but it’s just one example of the authorities taking crop circles seriously.

I would strongly recommend readers to watch the Richard D Hall documentary entitled, “Crop Circles the Hidden Truth”. It can be found on Youtube or the DVD can be purchased from Richard’s website at http://www.richplanet.net/ . This was Richard’s first major documentary. David Cayton, T. Roy Dutton and I were the major contributors to it. The three of us have spent a great deal of time over the years in the crop circles of Wiltshire. Many hours of study have shown us that whereas the vast majority of crop circles are man made, there a few which we are certain were created by visitors to this world, using unknown means resulting in specific changes to the plants and soil which cannot be accounted for by our technology.

David and I have measured transient levels of radiation in certain crop circles which were many times higher than normal background radiation. On one occasion by Silbury Hill, David completely destroyed a radiation monitor. As he lowered the probe into the crop circle, the audible sensor screamed at him and the meter needle shot off the scale. For many years David was head of the non destructive testing of aircraft department at British Aerospace in Woodford, and as such was responsible for all radioactive isotopes being used on the site. I think that we can assume from this that he knows what he’s doing when it comes to radiation monitors!

On the 9th of August 2001, David and I had the wonderful experience of being the first people to set foot in a genuine crop circle by Woodborough Hill, near Alton Barnes, Wiltshire. The difference between the genuine article and man made efforts is like the difference between chalk and cheese. It was pristine in appearance and we both felt very awkward about entering, not wishing to spoil the gift that we’d been given. However we did enter, as it was the only way to gather evidence. That single crop circle could easily be the subject of a future talk at MUFOS, but for the time being, here are a few of the photos we took of it, plus an aerial view taken by Lucy Pringle; see http://www.lucypringle.co.uk/ . 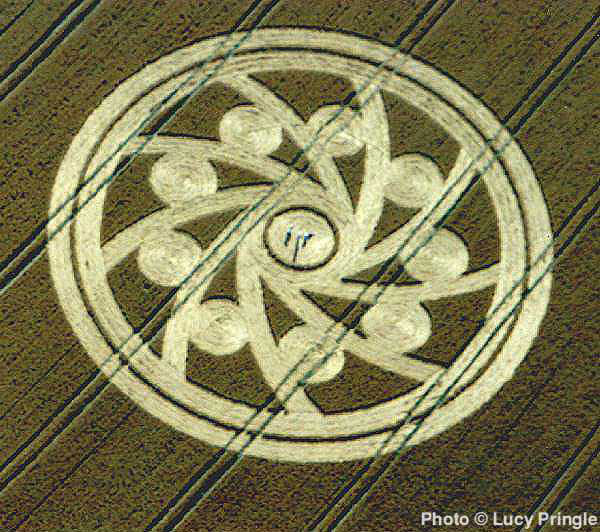 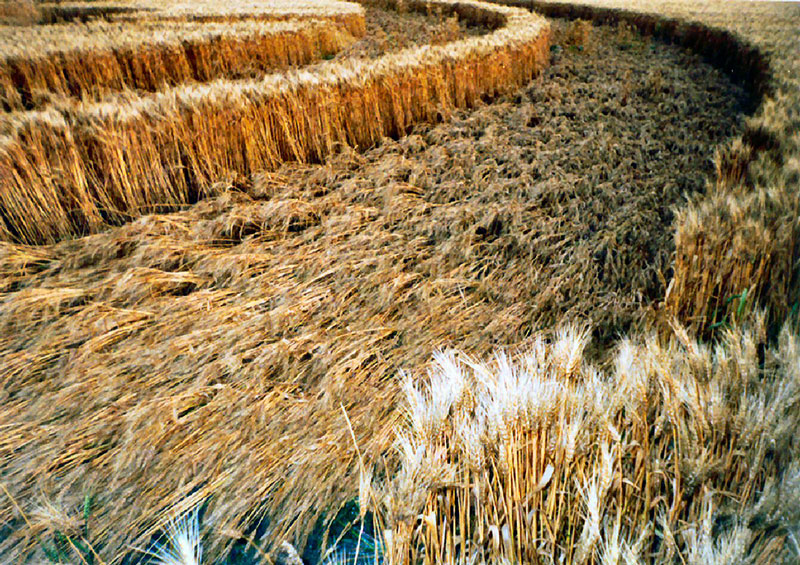 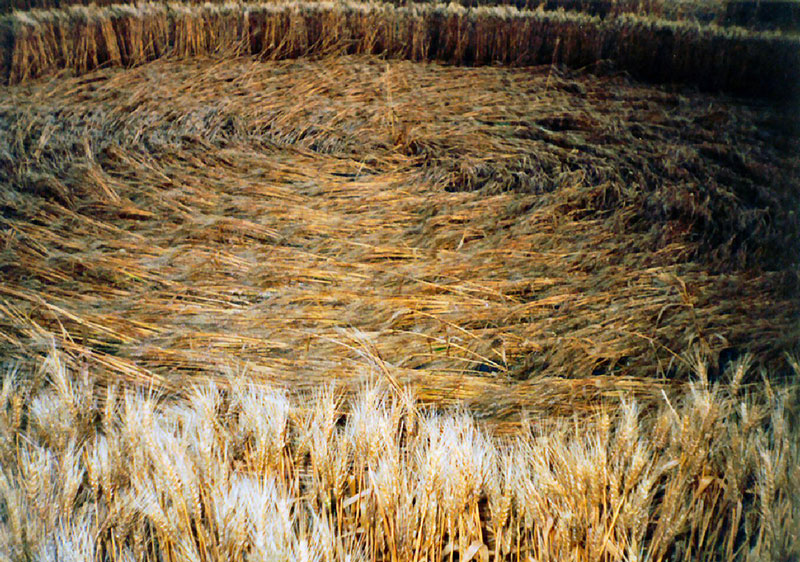 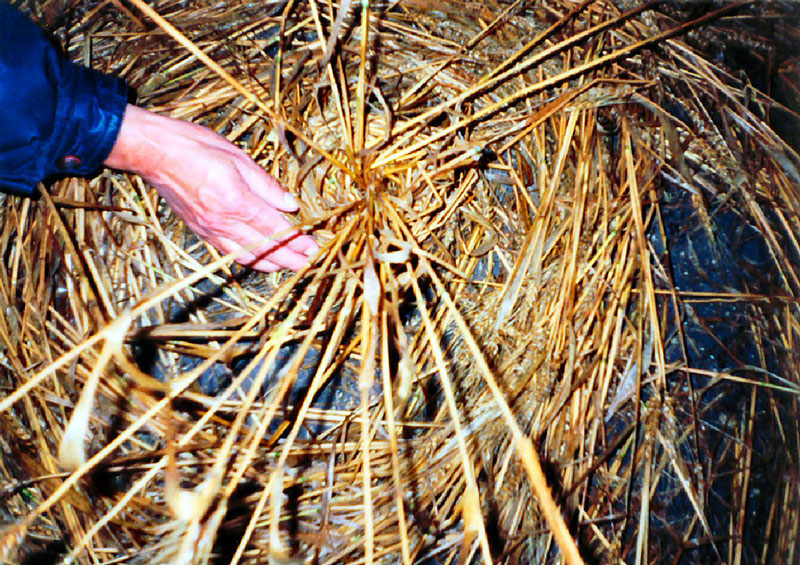 I have made many good friends over the years through my crop circle research, and personally know many of the leading lights in the subject, including Mary Bennett, Colin Andrews, Busty Taylor, Lucy Pringle, Charles Mallett, Linda Moulton-Howe and Nancy Talbott.

Nancy is the driving force behind the BLT Crop Circle website; http://www.bltresearch.com/ . If you are wishing to learn about crop circles, then you cannot do better than to visit her website. Nancy and I have been friends for quite a few years now, and I personally vouch that she is a person of the highest integrity and honesty. There is much disinformation spread on the internet by so called genuine researchers, but anything you read on Nancy’s website will be the absolute truth as far as she knows it.

Nancy began her website with the intention of providing full scientific analysis of crop circles which she has done wonderfully well. However in more recent years, she has found that it is necessary to include what might be considered paranormal aspects on the website. She has been very brave indeed to do this, as it has left her wide open to attack from debunkers and government agencies wishing to discredit her work. The more knowledge you gain about these subjects, the more you are forced to think outside the box. This is very uncomfortable for some people, particularly those with a scientific bent like Nancy, however whether we like it or not, this is where the evidence leads us. 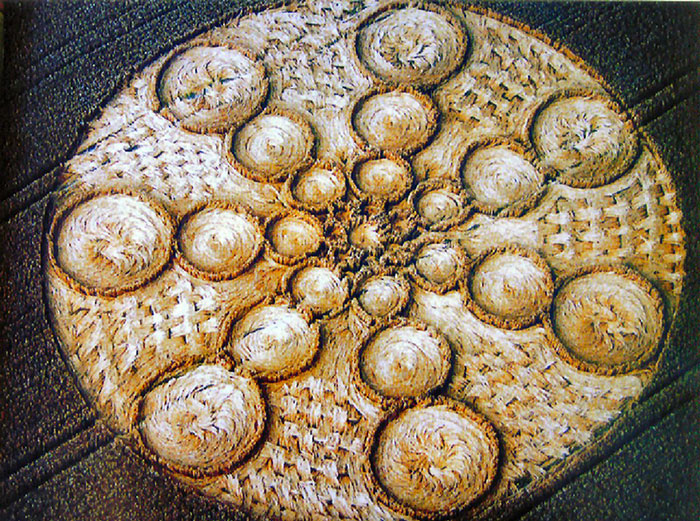 Contrary to what many people might think, crop circles are far from a new phenomenon. Here’s a link concerning The Mowing Devil from 1678, http://mysteriousuniverse.org/2012/07/the-mowing-devil-mystery/ . David Cayton and I have personally interviewed farmers in Wiltshire who told us that they had seen crop circles in their fields as far back as the 1940’s. Crop circles are a huge subject which I’m sure will be discussed at length within our society. I will be happy to show photos and film taken in the crop circles, and share with you what I have learned so far.